You should display the flag every day from sunrise to sunset, weather permitting. If you would like to display your flag at night, it must be illuminated. We have a great selection of solar lights that mount on top of the pole to ensure illumination.

HOW LONG SHOULD I FLY THE FLAG AT HALF-MAST?

The President may order the flag to be flown at half-staff to mark the death of other officials, former officials, or foreign dignitaries. In addition to these occasions, the president may also order half-staff display of the flag after other tragic events. When a half-staff order is issued, it will state when and how long the American flag or any state flag should be flown at half-staff. In any event, the flag should be briskly run up to the top of the staff before being lowered slowly to the half-mast position.

During Half-Staff flag flying days, all flags should be lowered as stated. For flagpoles with multiple flags, remove any additional flags below the American flag that are suspended at or below the cleat on your flagpole for the duration of the half-staff order. This will eliminate the chance that one of your flags will be dishonored by touching the ground.

The flag is to be flown at half-staff at all federal buildings, grounds and naval vessels in the Washington, D.C., area on the day and day after the death of a United States senator, representative, territorial delegate, or the resident commissioner from the Commonwealth of Puerto Rico. It should also be flown at half-staff on all federal facilities in the state, congressional district, territory, or commonwealth of these officials.

How to Display your flag

ON A POLE WITH ANOTHER FLAG

When the American flag
is on the same pole as
an organization, state, or
city flag, the U.S. flag is
always at the top
of the pole, in a position
of honor.

AT HALF-STAFF OR HALF-MAST

AGAINST A WALL OR IN A WINDOW

When displayed either
horizontally or vertically,
the union or blue field
should be to the
observer’s left, as shown.

WITH THE FLAGS OF OTHER NATIONS

Each flag should be the same size and displayed
at the same height. It is inappropriate
to display one country’s flag above another.

FROM A STAFF ADJACENT TO OTHERS
The U.S. flag should be placed in a position of
honor, which is the extreme left from the most
common viewing point.
IN A GROUP OF FLAGS
In a group of flags
displayed from staffs,
the U.S. flag should
be at the center
and the highest point
SUSPENDED OR HANGING OVER STREET
When not on a staff, the
U.S. flag should be displayed
flat, or suspended so that its
folds fall free. When flag is
displayed over a street,
place the union side facing
north on an east and west
street or east on a north and
south street.
CROSSED STAFFS WITH ANOTHER FLAG
When it is displayed with another flag against
a wall from crossed staffs, the flag should be on the
right, the flag’s own right (viewer’s left), and its
staff should be in front of the staff of the other flag
IN AN AUDITORIUM OR CHURCH SETTING
When the U.S. flag is displayed
on a staff situated on a platform
or stage with a speaker, the flag
should be to the speaker’s right.
Additional flag sets should be
displayed to the right of the American
flag from the most common viewing
point. If it is displayed flat or hung
vertically, it should be positioned
above and behind the speaker with
additional flags to the right from
the most common viewing point.

No disrespect should be shown to the flag of the United States of America; the flag should not be dipped to any person or thing. Regimental colors, State flags, and organization or institutional flags are to be dipped as a mark of honor.

When to fly Old Glory 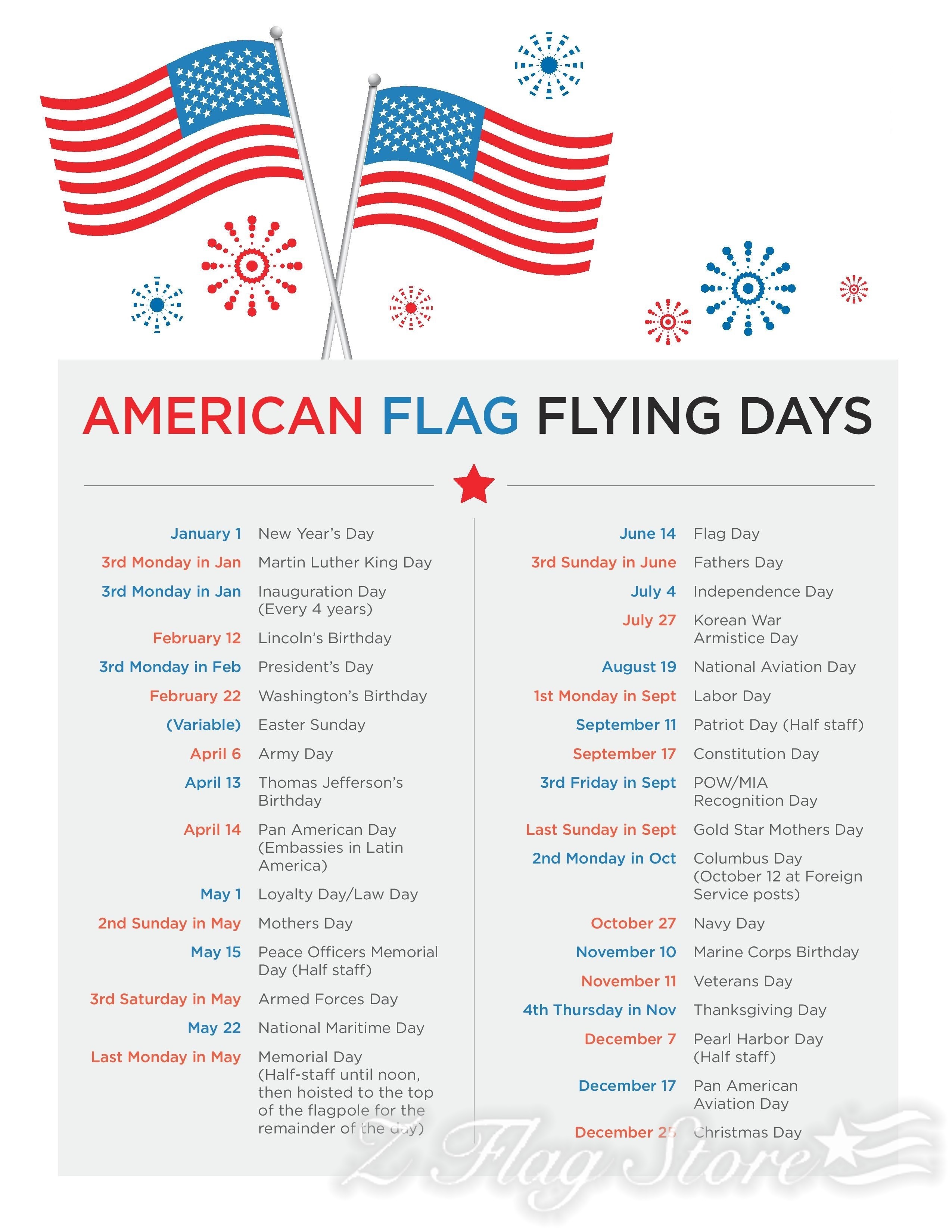